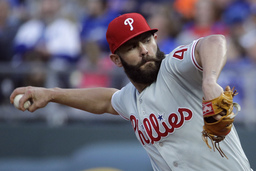 Jake Arrieta had his most successful seasons when he was with the Chicago Cubs from 2013-17.

The right-hander will face them for the first time when he takes the mound for the visiting Philadelphia Phillies in the opener of a four-game series on Monday night at Wrigley Field.

Arrieta (4-4, 4.02 ERA) won the National League Cy Young Award with Chicago in 2015 and was an All-Star with the Cubs in 2016, helping them win their first World Series title in 108 years. He threw no-hitters in each of those seasons, as well.

But the Cubs didn't make an effort to re-sign Arrieta after the 2017 season and the 10-year major league veteran signed a three-year, $75 million deal with the Phillies instead.

Chicago used some of that money to sign right-hander Yu Darvish to a six-year, $126 million deal, and he'll oppose Arrieta in the series opener.

"He's a legend in Chicago, for sure," Darvish told reporters of Arrieta. "I respect that, and I'm really looking forward to facing him."

Neither pitcher is having the type of success many expected when they changed teams.

Darvish (2-3, 5.14) has struggled with control issues this season, walking at least four batters in six of nine starts.

The four-time AL All Star with the Texas Rangers seemed to find some answers in his last outing, however, striking out 11 and walking none over 5 1/3 innings against the visiting Cincinnati Reds. He gave up two runs and five hits in the 6-5 loss, but didn't receive a decision for the third straight start.

Cubs manager Joe Maddon said he believes Darvish is close to putting it all together.

"There's going to be that moment, that epiphany, whatever you want to call it, it's going to happen," Maddon told reporters after Darvish's last start. "And then he's going to take off, and then you're going to see this incredible run he's going to get on."

Darvish is 1-0 with a 0.73 ERA in two career starts against the Phillies.

Arrieta got off to a solid start this season and was 3-1 with a 2.25 ERA after four outings, but has dropped his past two starts and is winless since April 27.

The Phillies are coming off a three-game sweep of the visiting Colorado Rockies and will be trying to win four games in a row for the first time since starting 4-0. They can also climb nine games over .500 for the first time this season.

Philadelphia right fielder Bryce Harper is beginning to heat up as well.

A six-time NL All Star with the Washington Nationals before signing a 13-year, $330 million deal with Philadelphia in March, Harper is riding a season-high five-game hitting streak and is 7-for-20 at the plate in that span with two home runs. That has inched his batting average from .219 to .235, moving him closer to his .277 career average.

"I just got to keep it going, that's it," Harper told reporters after hitting a two-run homer in a 7-5 win on Sunday. "On any given day, it could be different. You can be 0-for-4 or 4-for-4. Just got to keep that same mindset, keep getting better, keep progressing."