A pair of aces meet when Nationals face Mets 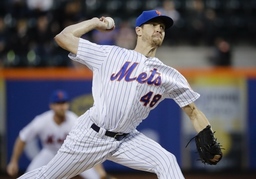 The Washington Nationals headed to the Big Apple early Monday morning with a chance to deliver the final knockout blow to the New York Mets and embattled manager Mickey Callaway. Two Mets wins later, the Nationals are the punch-drunk team that looks as if it could topple over with a slight nudge.

Fortunately for the Nationals, Max Scherzer is on the mound Wednesday night. Unfortunately for Washington, so too will Jacob deGrom.

The last two National League Cy Young Award winners are scheduled to square off in what could be a taut pitcher's duel Wednesday night, when Scherzer (2-5, 3.72 ERA) will try to play the role of stopper for the Nationals against deGrom (3-5, 3.98 ERA).

The Nationals were dealt their third straight loss Tuesday, when they squandered seventh- and eighth-inning leads before Mets shortstop Amed Rosario legged out the game-winning RBI infield single with two outs in the ninth inning to lift New York to a 6-5 victory.

The loss dropped the Nationals a season-worst 10 games under .500. Of Washington's 29 defeats, 15 have come by two runs or fewer or in extra innings.

That was almost surely the message presented to Callaway when he met Monday with rookie general manager Brodie Van Wagenen and ownership after the Mets finished a 1-5 road trip that ended with a three-game sweep at the hands of the Miami Marlins, who have the worst record in baseball.

Runs could be at a premium in the second meeting of the season between Scherzer and deGrom, who took 29 of 30 first-place votes in winning the Cy Young last year. The other first-place vote went to Scherzer, who won the award the previous two campaigns.

Both aces lost their most recent starts last Friday and enter the game with unusually high ERAs and losing records, though their peripherals indicate better days are ahead.

Scherzer, who leads the NL with 87 strikeouts, has a strikeout-to-walk ratio of 6.21/1, which would be the second-best of his career, and entered Tuesday with an NL-best 2.45 fielding independent ERA.

DeGrom, who missed 10 days in April due to strep throat and a sore elbow, is averaging 11.6 strikeouts per nine innings, which was tied for third in the NL entering Tuesday and would be the highest rate of his career.

Scherzer gave up three runs over six innings last Friday in the Nationals' 14-6 loss to the Chicago Cubs. DeGrom allowed seven runs (six earned) over five innings as the Mets fell to the Marlins 8-6.

Scherzer is 10-5 with a 2.59 ERA in 19 career appearances (18 starts) against the Mets. He no-hit New York on Oct. 3, 2015, when he whiffed 17 and missed a perfect game after a sixth-inning throwing error by third baseman Yunel Escobar.

DeGrom outdueled Scherzer on Opening Day, when the right-hander struck out 10 over six scoreless innings in the Mets' 2-0 win. Scherzer took the loss after striking out 12 and giving up both runs over 7 2/3 innings.