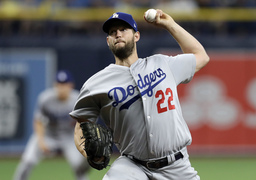 Jacob deGrom vs. Clayton Kershaw on Monday means there will be no easing into a series between one of the league's hottest teams and the best team the National League has to offer.

A matchup between the visiting New York Mets and the Los Angeles Dodgers suddenly has major intrigue after the Mets' front office elected to spare the job of manager Mickey Callaway one week ago.

Mets players have shown their appreciation by winning six of their last seven games.

Now deGrom (3-5, 3.72 ERA) will look to repeat his solid outing Wednesday against the Washington Nationals, when he gave up one run on two hits over six innings, with his eight strikeouts matching his most since April 14. However, the right-hander is 0-4 in eight career starts against the Dodgers, albeit with a 3.20 ERA.

The Mets swept the Nationals to open their just-concluded homestand, and then won two of three against the Detroit Tigers, all after they were swept by the Miami Marlins, the worst team in the NL.

"I know how we've been talking about our potential, and what we can do, and what we're capable of doing," Mets infielder Dominic Smith said, according to MLB.com. "I felt like this week was just a testament of that."

The Mets have worked themselves back to .500 at 26-26. They now begin a seven-game West Coast swing that starts with a mettle-tester against a Dodgers team that has the best record (35-18) in the NL and is coming off a 6-2 road trip.

Kershaw will enter his eighth start of the season with a 3.33 ERA, which would be his highest for a full season since his rookie year in 2008. But Kershaw just knows how to win. He is 4-0 this season as the Dodgers have won all seven games he has started.

In fact, the Dodgers have won Kershaw's last 15 starts in the regular season going back to last August. Against the Mets, Kershaw is 8-0 lifetime with a 1.98 ERA in 13 starts.

It does not hurt the left-hander's cause that he is backed by one of the best offenses in baseball.

The Dodgers are led by Cody Bellinger, who is having an MVP-caliber start to his season. Bellinger will enter the series with a .386 batting average that easily is the best in baseball. He is also tops in on-base percentage (.470), slugging percentage (.755), RBIs (48) and hits (71).

And the offense is only getting stronger. Justin Turner is hitting his stride with a 5-for-5 game in Sunday's 11-7 win over Pittsburgh. And Corey Seager appears to be emerging from a slow start, with a deep home run Sunday and hits in four of his last five games.

The Dodgers have been good for some time now, but this year, they look even more determined.

"I think it's a different animal than last year," Dodgers infielder Max Muncy said. "Last year, we relied pretty heavily on the home run, and this year, we're able to produce runs in a different manner. And that's making us a more complete team and a more dangerous team."