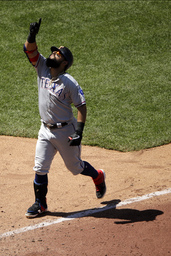 KANSAS CITY, Mo. (AP) Rougned Odor and the rest of the Texas Rangers had been using the Kansas City Royals' beleaguered pitching staff for batting practice most of the sun-splashed afternoon.

Then the Rangers used Kansas City's backup second baseman for it, too.

One of Odor's two homers came off Chris Owings, who was summoned by the Royals in the eighth inning to try to close out the 16-1 blowout Thursday. Hunter Pence also went deep off the utility man as Texas hit five homers in all, piled up 21 hits and won the rubber game of the three-game series.

"We've done a good job of salvaging the last couple of games," said Lance Lynn, who earned the win with a strong start that ultimately got lost amid the barrage of runs.

"For me, I have a chance to ride a loss or a win from the night before," he said. "That's always my motto. Whatever happened the night before I want to get the team going."

Calhoun and Joey Gallo each homered among their four hits, and Danny Santana also had four knocks, though some of that damage came off a utilityman. Royals manager Ned Yost wanted to save his bullpen for an upcoming road trip, so he called Owings off the bench in the eighth inning.

Lynn (5-3) allowed a run in the first but little else over the next six innings as the Rangers won their first road series in nine tries. Their last one came last September in San Diego.

Homer Bailey (4-4) allowed six runs, eight hits and four walks in an all-around dismal day for the Kansas City pitching staff. Brad Boxberger coughed up three runs in relief of him as the Royals lost the rubber game of a series for the 13th consecutive time dating to last season.

Kansas City actually struck in the first when youngster Nicky Lopez, capping a solid debut series, hit the first of his two doubles and Adalberto Mondesi followed with a sacrifice fly. But Lynn and the Rangers controlled the game the rest of the way.

They pulled even on Gallo's homer to left leading off the fourth, then battered Bailey and the bullpen by sending five runs across during the decisive fifth inning.

It started with a leadoff walk to Isaih Kiner-Falefa, continued with consecutive singles by Danny Santana, Calhoun and Nomar Mazara, and included two more walks by Bailey that sent in a run.

The veteran right-hander was finally yanked from the game, and Brad Boxberger appeared to have the Royals out of the inning when he induced Odor to hit a groundball. First baseman Ryan O'Hearn was able to field the ball cleanly but threw it away, keeping their misery going.

"There was a couple of hits. We missed being in the right spot cutoff-wise, trying to hold the game right there," Yost said. "Brought in Boxberger and throwing error broke it open for them."

Texas pushed across three more runs in the sixth, drawing a trio of walks off Boxberger and former closer Wily Peralta. It was the second straight inning the Rangers batted through the order.

"It's kind of what we've been doing all year," Rangers manager Chris Woodward said. "It was a 1-1 game going into the fifth. Homer Bailey was doing OK at that point. Those at-bats (in the fifth) kind of set the tone for the rest of the game. Big hits, big walks. That's something we pride ourselves on. If you get a good pitch, take a rip. If not, let the next guy do it."

Lopez was the Royals' lone bright spot. Along with an RBI double, the 24-year-old rookie doubled in the third and drew a walk in the sixth while playing solid defense at solid second base.

The Rangers have won five of six against Kansas City. They also have won nine of their last 11 at Kauffman Stadium. ... Texas had lost 15 of 20 on the road. ... The Royals had committed a league-low 14 errors before O'Hearn's miscue in the fifth inning. ... Owings allowed four runs on six hits and a walk while retiring five batters, giving him a 21.60 ERA for his career.

The Rangers intend to use openers the first two games of their weekend series against St. Louis, though Woodward was not ready to say who they will be. The Royals head to Los Angeles to face the Angels on Friday night with Brad Keller (2-4, 4.47 ERA) on the mound.