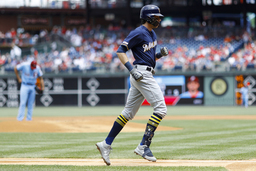 PHILADELPHIA (AP) Christian Yelich took advantage of the few pitches he saw in the zone.

Yasmani Grandal and Mike Moustakas also went deep as the Brewers won their third in a row after losing the series opener against the NL East-leading Phillies.

Davies (5-0) allowed three runs - one earned - and four hits in six innings. He pitched out of trouble often because of four errors behind him.

Yelich homered to right-center in the first for a 1-0 lead off Zach Eflin (5-4). He added a solo drive off Edgar Garcia in the eighth to make it 8-3. The reigning NL MVP has three of his five career multi-homer games this season.

Yelich had three hits and scored three times, and is batting .342. The Phillies pitched around him most of the series.

"You just trust in your teammates, trust in the guy behind you to do some damage," Yelich said. "The goal is to get on base, keep the line moving."

Ryan Braun provided protection in the lineup for Yelich, adding three more hits to increase his career average at Citizens Bank Park to .417 (63 for 151) with 27 extra-base hits and 45 RBIs in 38 games.

"I'm going to petition the league to play our next series against the Phillies here," Braun joked.

The slugger is more impressed with Yelich's hitting.

"I've never seen anybody this good for this long," Braun said. "It's really special."

Grandal hit a three-run shot off Seranthony Dominguez in the seventh and Moustakas took Austin Davis deep in the ninth.

Jean Segura hit a solo homer for the Phillies.

"They outplayed us from every angle," Phillies manager Gabe Kapler said.

Eflin gave up four runs and seven hits in five innings. He tossed two complete games in his previous three starts, including a four-hitter last Saturday at Kansas City.

Davies helped himself at the plate, too. He doubled and scored in the third, and got an RBI with a bunt single in the fourth.

"It was good to bounce back," Davies said about the Brewers losing two of three to the Cubs in the previous series. "Our offense opened up."

Davies has allowed two earned runs or fewer in each of his first nine starts this season, the longest such streak to start a season in Brewers history.

With still 12 games remaining in the month, Yelich already has more home runs (18) than any Brewers player before June 1 since 2007, when Prince Fielder hit 19.

Kapler moved slumping Bryce Harper up from the No. 3 spot in the batting order to second. Harper went 1 for 4 with a strikeout. He's hitting .180 (9 for 50) with 20 strikeouts in May.

Yelich, Moustakas and Braun each were hit by pitches.

Brewers: C Manny Pina was placed on the 10-day injury list with a right hamstring strain. ... C Jacob Nottingham was recalled from Triple-A San Antonio to take his roster spot.

Phillies: INF Scott Kingery had his rehab transferred to Double-A Reading. He went on the injury list with a strained right hamstring on April 20.

Phillies: LHP Cole Irvin (1-0, 1.29) makes his second career start in the opener of a three-game set vs. the Rockies.