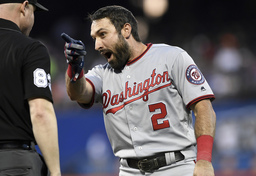 NEW YORK (AP) Once they were informed no change was imminent in the dugout, the New York Mets looked a lot more relaxed at the plate.

Amed Rosario and Pete Alonso homered in the first inning as the Mets, after learning embattled manager Mickey Callaway is staying around, broke out of their offensive funk to beat the Washington Nationals 5-3 on Monday night.

"I'm really happy that we rose to the occasion today," Alonso said. "I think he deserves to be our manager. He's a great leader and we love playing for him."

Carlos Gomez cracked an RBI double off the wall for his first Mets hit in 12 years, and Todd Frazier had a run-scoring single to help New York (21-25) stop a five-game losing streak.

After the Mets built a 4-0 lead in the third against Patrick Corbin, fill-in starter Wilmer Font and five relievers held off the rival Nationals in the opener of a four-game series.

"The at-bats were obviously way more quality," Callaway said. "Great pitcher out there, one of the best in the game, and we grinded it out."

Anthony Rendon homered again and Yan Gomes ended an 0-for-23 slump with three hits for Washington, including an RBI single. Juan Soto also singled home a run to make it 4-3 before Robert Gsellman got out of the eighth.

Corbin (4-2) was tagged for four runs and six hits over five innings. The $140 million lefty, who has faced the Mets four times in 10 starts this season, struck out 11 in a 5-1 victory against them at home last Wednesday.

"They made me battle all night," Corbin said. "They've seen me a lot. I've seen them a lot. Tonight they got me. Just made a couple mistakes, wasn't as sharp as I've been."

Pinch-hitter Dominic Smith delivered a two-out RBI single in the bottom of the eighth on the first pitch from left-hander Tony Sipp, who came off the injured list earlier in the day.

Font, pitching in place of injured Jason Vargas, was told he was starting when he arrived at the ballpark. He lasted four innings before Drew Gagnon (2-0) tossed two hitless innings. Edwin Diaz pitched out of trouble in a scoreless ninth for his 11th save in 11 tries.

"It was super important to get home and to get that first victory out of the way," Font said through a translator.

Washington dropped to 2-14 in series openers this season.

Before the game, with questions intensifying about Callaway's job security early in his second season as skipper, the Mets front office held a meeting with players and coaches to declare support for the staff.

After that, a players-only meeting was led by veterans.

The Mets had lost 21 of 32 games overall, including all three at major league-worst Miami over the weekend - becoming the first team to get swept by the lowly Marlins since 2017. New York totaled only three hits in consecutive shutouts Saturday and Sunday, the first time the club was held to two hits or fewer in consecutive games since 1967.

"We're not looking to blame a manager," Van Wagenen said. "He has our full support to lead this team for the foreseeable future."

It took all of six batters for the Mets to get three hits Monday.

"That was great," Frazier said. "Kind of came together today, talked about a few things, got a few things off our chest. We felt good going into today's game."

Rendon is 12 for 25 (.480) with three homers, five doubles, eight RBIs and 10 runs in his last seven games. He has homered in two straight games and three of his past four.

Nationals: Sipp was reinstated from the 10-day IL after missing 11 games with a strained oblique. The team also designated LHP Dan Jennings for assignment and claimed RHP Javy Guerra off waivers from Toronto. The Nationals hope Guerra will join them Tuesday. ... 1B Ryan Zimmerman (plantar fascitis) felt less sore than he expected after running Sunday, according to manager Dave Martinez. Zimmerman was scheduled to do some baseball activities Monday.

Mets: Right-handed reliever Seth Lugo was placed on the 10-day IL with tendinitis in his pitching shoulder. The team selected the contract of left-hander Hector Santiago from Triple-A Syracuse and transferred infielder Jed Lowrie to the 60-day IL. ... Van Wagenen said OF Michael Conforto, on the seven-day concussion list, has been symptom-free for three days. ... Vargas (left hamstring tightness) threw 74 pitches over four-plus innings during a rehab start Sunday for Double-A Binghamton against Trenton. He allowed one run and two hits with three walks and five strikeouts. The next step for Vargas is a side session but "there's a good chance" he might not need another rehab outing before the Mets slot him back into the rotation, Callaway said.

Nationals: RHP Erick Fedde (0-0, 3.38 ERA) is scheduled to make his first start of the season Tuesday night after five relief appearances. Fedde will pitch in place of injured Anibal Sanchez.