Twins, Angels postponed, will be made up on Thursday 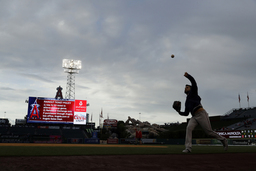 The Twins had their series finale against the Los Angeles Angels postponed because of weather and unplayable field conditions. It has been rescheduled for Thursday.

It is only the third postponement at Angel Stadium since 1995 and the 12th since the stadium opened in 1966. The last postponement occurred on July 19, 2015, against Boston.

Minnesota is 31-16 and has a seven-game lead over Cleveland in the AL Central, which is the earliest it has been up that much in the division. The previous earliest was June 24, 2002, when they were seven games ahead of the Chicago White Sox.

The Twins - who haven't won a division title since 2010 - have taken five of six on this road trip and are trying to get a sweep in Anaheim for the first time since 1996.

Manager Rocco Baldelli wasn't thrilled with the decision to postpone the game, but he also said he realized as the visiting team that it wasn't his call.

It rained at Angel Stadium two hours before Wednesday's game, causing puddles to form in both left and right field. The grounds crew worked for over an hour to remove water from the outfield, but conditions remained unplayable.

Martin Perez (6-1), who had been scheduled to start for Minnesota on Wednesday, will take the mound against Los Angeles' Matt Harvey (2-3).

The Twins are batting .313 with 14 home runs and have outscored the Mariners and Angels 51-22 on the current road trip. Minnesota took three of four at Seattle before arriving in Southern California and winning the first two against the Angels.

"We have one of the best offenses in the league and can change the game in one inning," designated hitter Marwin Gonzalez said. "We are on a good roll right now. It's super early but we are winning series. If you play good in short series you are going to win."

Angels manager Brad Ausmus said there was too much water in the outfield to be able to play.

"As they moved the water around, it seems to disappear. You don't see the puddling but when you stepped on it, it would just come up around your shoe," he said. "I couldn't imagine trying to field a ball coming through that water, picking it up soaking wet and trying to make a throw to a base, never mind what could happen if your cleats didn't catch."

The Angels have dropped three straight after winning the first two on their homestand.

The Angels placed C Kevan Smith on the seven-day concussion injured list after he took a foul ball of the mask during the fourth inning of Tuesday's game. In a corresponding move, the Angels selected the contract of C Dustin Garneau from Triple-A Salt Lake.