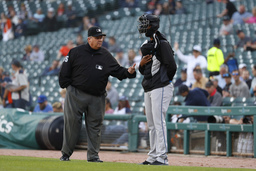 Harold Ramirez hit his less than two weeks after his debut. Garrett Cooper had a much longer wait.

Cooper hit his first big league home run in the sixth inning, and that was the start of an impressive comeback by the Marlins, who rallied for their fifth straight victory, 6-3 over the Detroit Tigers on Wednesday night. Cooper played in the majors for parts of the 2017 and 2018 seasons as well, but this was only his 39th game.

"It was about time I got one," said Cooper, who has battled injuries throughout these past three seasons. "I've got a week of games under my belt right now, and finally get back to feeling how I felt the last 15 years of playing baseball, where you're playing every day."

Ramirez hit his first homer in a win Tuesday night. The Tigers led 3-0 on Wednesday before Cooper's solo shot. The Marlins then scored three runs in the seventh, and Brian Anderson added a two-run homer in the eighth.

Detroit has dropped eight in a row - and Sunday's game was suspended with the Tigers trailing Oakland in the seventh inning.

"It's just a really rough stretch right now," Detroit manager Ron Gardenhire said. "We'll think back to this day somewhere down the road here and say, `Man that was brutal, let's not do that again.' But right now we're going through it."

Detroit starter Daniel Norris was solid, but with the Tigers up 3-1, he gave up a single to Ramirez to start the seventh. Buck Farmer (2-3) relieved him and allowed a single to Martin Prado. Then Neil Walker hit a two-run double to tie it.

One out later, Miguel Rojas put Miami ahead to stay with an RBI single. Anderson made it a three-run game with his home run in the eighth.

Jose Urena (2-6) allowed two earned runs in six innings for the Marlins. Austin Brice pitched a scoreless seventh, retiring Miguel Cabrera on a weak grounder with men on first and third for the final out. Tayron Guerrero handled the eighth, and Sergio Romo pitched a perfect ninth for his eighth save in nine chances.

Detroit scored a run in each of the first three innings. Niko Goodrum hit an RBI single, Gordon Beckham drove in a run with a groundout, and Christin Stewart added a run-scoring double.

Detroit left-hander Daniel Stumpf and Miami righty Sandy Alcantara had a playful standoff before the game, standing several feet in front of their respective dugouts and not budging.

"I kind of just stand out there every time, make sure everyone walks off," Stumpf said. "It just so happened today I had someone that did not walk off. So I wasn't going to lose."

With the game about to start, an umpire eventually went over and got Alcantara to vacate his spot, and Stumpf did so, as well. Alcantara said an ump indicated he could be ejected if he didn't move, and Stumpf said the same.

"Third base umpire said get off the field or he's going to throw me out, so I was just standing there because the umpire was talking to (Alcantara). I saw him starting to move, so it looks like I'm going to hang in there," Stumpf said. "Everyone was yelling at me from the dugout saying you better not move. I wasn't going to give it up."

Gardenhire expressed concern after the game about family in Oklahoma, which had dangerous weather Wednesday night.

"We're fixing to play a game and I'm watching the weather and got all my family there down in the pits that we have for them, so not much fun," Gardenhire said. "It's a pretty ugly storm going through and it's just nonstop. A lot of hail balls, you name it. But we made it through so far, so hopefully we can continue through the night."

Marlins: Something appeared to be bothering Romo on the mound during the game's final batter. Manager Don Mattingly went out to check on him, but Romo remained in the game. Mattingly said Romo has a knee issue he wears a brace for, and he was concerned about his landing area at the mound.