Hamels gets a no-decision against Phillies, Cubs win 8-4 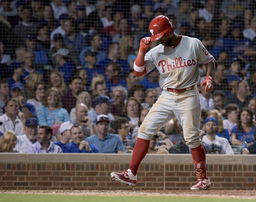 Hamels struggled in his first start against his original team, Albert Almora Jr. hit his first career grand-slam and the Cubs rallied from an early three-run deficit with three homers, beating the Philadelphia Phillies 8-4 Wednesday night.

With the game tied at 3 in the fifth, Almora launched Cole Irvin's changeup into the shrubs in the center-field batter's eye. The 25-year-old Almora popped out of the dugout for a curtain call and doffed his helmet to an ovation from the crowd of 39,246.

Irvin got Almora to ground out with the bases loaded and two outs in the first, but not a second time.

"I didn't want to leave six men out there (on base) just on myself," Almora said. "(Irvin) was good getting me out with the changeup. I saw everything else pretty well, so I told myself see the changeup."

Anthony Rizzo hit his 12th homer, a mammoth shot in the third inning that struck the neon beer sign atop the right field scoreboard, tying it at 3-all. That allowed Hamels to escape with a no-decision and remain unbeaten this season, despite allowing three runs on nine hits and two walks through four innings.

"It literally almost knocked out the sign," manager Joe Maddon said. "He got the `D' (in the sign)."

Javier Baez added a solo shot in the seventh. He started at shortstop after being held out of the lineup for two games with a bruised right heel.

Tyler Chatwood (3-0) earned the win with four innings of one-run, three-hit relief. Steve Cishek worked around a single and got the final three outs.

Chatwood seems to be overcoming control problems that have haunted him in the past.

Andrew McCutchen had three hits, including a solo homer off Chatwood in the eighth. Jean Segura extended his hitting streak to 13 games with a single and a double as the Phillies dropped their second straight to Chicago in a four-game series between division leaders.

Irvin (2-1) was roughed up for seven runs on seven hits after winning his first two starts following his recall from Triple-A.

After 99 pitches on a warm night, Hamels was replaced by Chatwood to start the fifth.

The lefty said facing the Phillies wasn't a big distraction "because it had been so long and the team has kind of changed over."

"The past couple of weeks, I just haven't been able to really locate my fastball," Hamels said, "and with that everything else just doesn't have the same sort of sharpness behind it."

The left-hander labored through a 38-pitch first inning as the Phillies jumped out to a 1-0 lead on J.T. Realmuto's ground-rule double into the vines on the right-center wall.

Philadelphia tacked on two more runs in the third against their former ace. Segura led off with a double and Bryce Harper followed with a drag bunt single under Hamels' glove. Rhys Hoskins and Cesar Hernandez hit RBI singles up the middle.

Hamels' threw a no-hitter against the Cubs at Wrigley Field in his final start for the Phillies on July 25, 2015. He struck out 13 and walked two in the 5-0 victory, then was dealt to Texas days later.

Irvin stroked a single up the middle in the second for his first major league hit.

Phillies: RHP Vince Velasquez (right forearm strain) threw a bullpen session on Wednesday and is scheduled to throw another on Friday in Milwaukee. The 26-year-old was 1-2 with a 3.86 ERA in six starts before going on the IL retroactive to May 8 and said he expects to be back in the starting rotation when he returns. "That's my spot," Velasquez said. "I believe that 100%." But manager Gabe Kapler said, "I don't see it as a right."

Cubs: Placed LHP Xavier Cedeno on the 10-day IL with left wrist inflammation and recalled RHP Rowan Wick from Triple-A-Iowa. Wick was 0-0 with a 2.84 ERA in 13 relief outings for Iowa. . RHP Pedro Strop (strained left hamstring) threw a successful 25-pitch bullpen session on Wednesday and is expected to toss another this weekend.