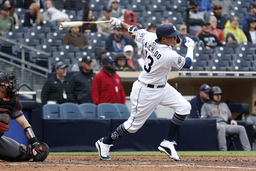 SAN DIEGO (AP) With Greg Garcia having a big day for his hometown team, the San Diego Padres' offense jumped on Arizona early and helped left-hander Eric Lauer win for the first time in seven starts.

Garcia had three hits, scored twice and drove in a run while Lauer pitched seven strong innings as the Padres beat the Diamondbacks 5-2 Wednesday for a three-game sweep.

While the Padres needed sixth-inning rallies in winning the first two games of the series, they jumped on rookie Merrill Kelly early, which allowed Lauer to go a season-high seven innings.

"We weren't in desperate need to see him do that, but if the offense gives the starting pitcher a cushion it's a lot easier to give him some leash to pitch," manager Andy Green said. "Our offense did that today so you could roll with Eric through the seventh even if the matchup's not the most ideal matchup in the world."

Lauer (3-4) held the Diamondbacks to one run and four hits, struck out seven and walked none to win for the first time since April 8 at San Francisco. Since then he had three losses and three no-decisions. He allowed Eduardo Escobar's RBI double in the sixth before striking out the side in the seventh.

"That's exactly what every starter wants," Lauer said of the big early lead. "You want to pitch with the lead, you want to go out there and be comfortable, knowing that your guys are behind you scoring runs for you."

Kirby Yates got the final three outs for his major league-leading 20th save after Adam Warren allowed a run.

Eric Hosmer had a big two-run hit for the second game in a row, this time a single off rookie Merrill Kelly in the three-run first that gave Lauer all the support he needed. Garcia was aboard on a leadoff single. Rookie Ty France doubled in Hosmer.

Hosmer hit a two-run homer off Zack Greinke to help the Padres to a 3-2 victory Tuesday night.

Garcia also doubled in the second and scored on Manny Machado's sacrifice fly, and hit an RBI single in the third during a brief downpour that sent fans scurrying for cover.

"We have a great pitching staff and to give Eric some early runs was great," Garcia said. "We just kind of cruised from there and we just tried to keep adding on.

"More importantly it was just a good day for the Padres. The fact I'm from here is just kind of icing on the cake," he said. "First and foremost, winning for the Padres is the best thing ever."

Garcia went to Valhalla High in suburban El Cajon and is the grandson of the late Dave Garcia, who was a coach on the Padres' staff in the 1970s and later managed the Angels and Indians. He was claimed off waivers from St. Louis on Nov. 6.

"It's awesome," the lefty said. "It's got to be great for him, too, to do it in front of his hometown and fans."

The Padres roughed up Kelly (4-5) for four runs and five hits in 1 2/3 innings. He walked four and struck out none.

"I think we got clipped early," manager Torey Lovullo said. "I thought Merrill just got jumped. He didn't get a chance to get into a really good rhythm and we were playing catch-up from the very beginning. We were fairly dormant for a couple of innings there. I thought the tone was definitely set in the first couple of innings."

Said Kelly: "I just didn't do my job. Coming off of some losses in a row it would have been big to get a nice quality start out of me today, and I just wasn't able to do that. Pretty much everything was off today."

Diamondbacks: Lovullo said INF Wilmer Flores has a small fracture on the top of his right foot. He was placed on the injured list on Tuesday after being hit with a pitch on Sunday.

Padres: Green said he doesn't expect rookie SS Fernando Tatis Jr. to rejoin the team on its forthcoming road trip. Tatis has been out since straining his left hamstring on April 28.

Diamondbacks: LHP Robbie Ray (3-1, 3.25) is scheduled to start Friday night in the opener of a three-game series at San Francisco.