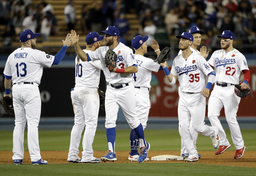 LOS ANGELES (AP) Cody Bellinger is not only producing runs for the Los Angeles Dodgers, he's preventing opponents from scoring them.

The slugger hit his 19th homer and threw out two runners from right field, leading the Los Angeles Dodgers to a 9-5 victory over the New York Mets on Monday night.

"It was a fun day," said Bellinger, who leads the NL with seven outfield assists. "You don't have many opportunities to affect a game from both sides, so when you do it is special."

Bellinger's throw to get Carlos Gomez at third and complete a double play in the eighth might be one of the plays of the year. Gomez tagged up when J.D. Davis' bases-loaded fly ball was caught by Bellinger 30 feet in front of the warning track. He fired perfectly on the fly to third baseman Justin Turner, who applied the tag just before Gomez's hand touched the bag - stopping a run from scoring.

"You're going to see that on highlights for the next 30 years. They're going to be playing that over and over," Mets manager Mickey Callaway said. "They played great defense tonight. When you swing the bats like they do and play great defense, they are going to be tough to beat."

The Mets got four of their first five hitters on base but took themselves out of a big first inning when Michael Conforto was cut down at home on a great throw from Bellinger while trying to score from second on Todd Frazier's single.

Two innings later, Bellinger hit a solo homer off deGrom to put the Dodgers up 2-1.

"The arm strength is one thing, but the arm accuracy is another. We saved ourselves an inning of baseball with those plays," manager Dave Roberts said.

Chris Taylor and pinch-hitter Kike Hernandez also homered for the Dodgers, who have won 10 of 12. Kenley Jansen entered with the bases loaded and pitched 1 2/3 scoreless innings for his 15th save.

Davis and Adeiny Hechavarria each hit a two-run homer for the Mets, who were coming off a 6-1 homestand.

Los Angeles trailed 3-2 before scoring six runs in the sixth. Taylor tied it with a solo shot off Tyler Bashlor (0-2), and Hernandez gave the Dodgers the lead with a three-run drive to right-center off Daniel Zamora.

Amed Rosario led off the game with a bloop double and scored on Pete Alonso's one-out single.

Joc Pederson began the Dodgers first with the first of three straight singles and tied the game when he came in on Corey Seager's grounder. The run originally didn't count because Seager was ruled out at first to complete a double play, but the call was overturned after a replay review.

After Bellinger's home run, Davis put the Mets back on top 3-2 in the fifth with a two-run drive off Kershaw.

Bellinger wasn't the only Dodgers outfielder to make a big defensive play. In the fifth, Tomas Nido was on first when Rosario doubled to left-center. Nido tried to score when the ball went to the wall, but Pederson made a strong throw to Seager, and the shortstop relayed home to catcher Russell Martin for the out.

The Dodgers have won 16 straight regular-season games started by Kershaw, which ties his career best from two years ago. Los Angeles also won 13 consecutive Kershaw starts in 2014, making him the only pitcher since 1920 with three separate streaks of 13 or more.

Kershaw's record is 9-0 during the current span. The left-hander has gone at least six innings in all eight of his starts this season, but Roberts said Monday's outing was his toughest yet.

"Grind is a good way to describe it," Roberts said. "He didn't have a feel for his mix but he still gave us a quality start."

After allowing two runs in five innings, deGrom is 0-4 with a 3.23 ERA in nine regular-season starts against the Dodgers. They are the only team the right-hander has faced in the regular season three times or more and has not defeated. He did beat Kershaw 3-1 in Game 1 of the 2015 NL Division Series, and also won the decisive Game 5 in Los Angeles.

"I didn't have my best stuff tonight but I was able to battle," deGrom said.

Jansen got his first regular-season save of five or more outs since July 4 last year against Pittsburgh. It was his fifth career save of at least 1 2/3 innings.

Mets: 2B Robinson Cano (quad) is on the road trip and doing some baseball activities. ... LF-INF Jeff McNeil (hamstring) and OF Brandon Nimmo (neck) are back in New York working with the training staff.

Dodgers: C Austin Barnes (groin) was placed on the 10-day injured list. Will Smith was called up from Triple-A Oklahoma City and is expected to be in the lineup Tuesday.