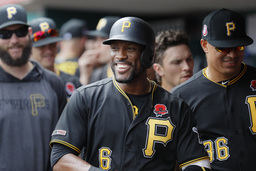 CINCINNATI (AP) After producing five outs in his first four at-bats, Bryan Reynolds was looking for a way to salvage his day.

The rookie outfielder hit a tiebreaking two-run triple in Pittsburgh's four-run eighth inning, and the Pirates beat the Cincinnati Reds 8-5 on Monday in the opener of a day-night doubleheader.

Reynolds' one-out liner off David Hernandez (1-3) got into the gap in left-center and drove in Cole Tucker and Adam Frazier. Starling Marte followed with a shot to center for his sixth homer, lifting Pittsburgh to an 8-4 lead.

"A runner on second, late in the game, you want to do something to drive him in," Reynolds said of his first career triple. "It's always nice to mark things off your list."

Hernandez felt he was close to escaping the situation.

"I thought I had Reynolds struck out," Hernandez said. "I didn't get the call. I didn't think he swung, but I thought I caught the bottom of the zone. I haven't looked at it again, but it looked good to me. You still have to make pitches after that. Marte was a flat slider, middle away. If I throw him a good one down and away, it's not a home run."

Pittsburgh manager Clint Hurdle credited Reynolds with not getting down.

"Toward the end of the day, you could see he wasn't happy with the results with the opportunities he had," Hurdle said. "You show up, and you keep fighting."

Josh Bell also went deep for the Pirates, who snapped a three-game losing streak. Kyle Crick (2-1) got four outs for the win.

Felipe Vazquez replaced Crick with the bases loaded in the eighth and struck out Nick Senzel, ending the inning. Vazquez then worked the ninth for his 14th save, yielding a sacrifice fly to Curt Casali before coaxing Yasiel Puig into a game-ending groundout.

Coming off a successful weekend series in Chicago, the Reds grabbed a 3-1 lead in the fifth on consecutive two-out RBI doubles by Senzel, Votto and Suarez, whose drive to center was inches away from being a home run.

But Gregory Polanco hit a tying RBI single in Pittsburgh's two-run sixth, and Bell made it 4-3 when he connected for his 17th homer in the seventh. It was Bell's 11th homer in May, tops in the majors.

Votto's error on Elias Diaz's potential double-play ball turned into an unearned run in the sixth.

Nick Kingham pitched 4 2/3 innings for Pittsburgh in his third start of the year. He permitted three runs and seven hits.

The doubleheader was created when the Pirates-Reds game on March 30 was rained out.

Marte's homer extended his hitting streak at Great American Ball Park to eight games. He is 15 for 40 with four homers in that stretch.

The Pirates brought up right-handers Alex McRae and Richard Rodriguez from Triple-A Indianapolis. They also acquired Yefry Ramirez in a trade with Baltimore for a player to be named or cash, and then assigned him to Indianapolis.

McRae was 0-1 with a 5.68 ERA in two games with Pittsburgh last season. Rodriguez served as the 26th man for the doubleheader.

Right-hander Dovydas Neverauskas was sent down to Indianapolis, and outfielder Corey Dickerson was transferred to the 60-day injured list. Minor league right-hander Jesus Liranzo was designated for assignment.

Dickerson has been out since April 4 with a right shoulder strain.

The Reds added lefty Cody Reed as their 26th player for the doubleheader.

Pirates right fielder Melky Cabrera was hit in the right elbow by a Castillo pitch with one out in the fourth inning. Cabrera angrily flung his bat in the direction of the Pittsburgh dugout, but he stayed in the game.

Hernandez plunked Frazier on the right foot with a pitch in the eighth. Frazier stayed in the game.

Reds: LHP Alex Wood has rejoined the team after spending the season at extended spring training in Arizona working out tightness in his lower back. He has started a throwing program that eventually will lead to bullpen sessions, followed by a rehab assignment.