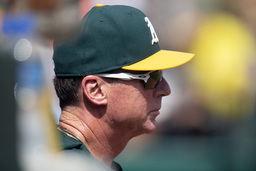 OAKLAND, Calif. (AP) The Oakland Athletics didn't seem too concerned after a lopsided defeat to the Texas Rangers prevented them from adding to their lead in the AL wild-card race.

Tampa Bay's loss to Boston earlier in the day gave the A's a little more margin for error and made it a lot easier for manager Bob Melvin's ballclub to move on.

"It's just a loss and that's on me," said losing pitcher Tanner Roark after the A's were beaten 8-3 by the Rangers. "Like we've done all year since I've been here, you move on. Nobody dwells on anything. You just get better."

The A's had won 10 of 11 but couldn't stretch their two-game lead over Tampa Bay for the top AL wild card. The Rays fell to the Red Sox 7-4 earlier Sunday. Cleveland is also two games back after beating Philadelphia 10-1.

"This time of year, sure you're going to take a series win, but we're more just trying to win every possible game we can," Melvin said. "We don't really talk about series wins until we've actually won a series. You don't want to give one away. That's going to be our thinking the rest of the way."

Jurickson Profar had three hits and an RBI for the A's. Marcus Semien doubled twice.

Roark (10-9) took a three-game winning streak into the day but fell behind early after Choo belted his first pitch 461 feet to center field. The ball landed in the seats above a row of luxury suites. Only A's first baseman Matt Olson and Angels slugger Mike Trout have reached that area this season.

Calhoun homered to right two batters later, and Andrus' two-run drive to left made it 4-0.

Calhoun connected off Roark again in the third for his 20th home run. It's the second career multihomer game for Calhoun, who grew up about 35 miles northeast of Oakland.

"I have been hitting the ball pretty good and not getting any results, so it felt good to get some today," Calhoun said. "One home run is always good but to get two felt really good."

"Putting good swings on bad pitches," Roark said. "Left the ball over the plate a lot of times and when you do that in this league you'll get hit hard."

Texas scored twice off A.J. Puk in the fourth before Mazara hit a first-pitch home run off Ryan Buchter leading off the fifth.

Rangers starter Lance Lynn (15-11) matched his career high with 12 strikeouts to end a five-game losing streak. The right-hander walked one and allowed two runs and seven hits in 5 1/3 innings.

Lynn also became the second Rangers pitcher in franchise history to throw at least 100 pitches in 30 starts. Hall of Famer Nolan Ryan did it in 1989.

"We got slapped around the whole road trip," Lynn said. "So it's a good bounce back."

Oakland's Nos. 5 and 6 hitters, Seth Brown and Khris Davis, were a combined 0 for 7 with seven strikeouts before Davis doubled in the eighth.

Choo's home run was his seventh leading off a game this season, tying the franchise record held by Ian Kinsler.

Athletics: Ramon Laureano was given a planned day off after coming out of Saturday's game not long after making a sliding, tumbling catch in the Rangers bullpen. With a day off Monday, manager Bob Melvin wanted to give Laureano extra rest.

Rangers: RHP Ariel Jurado (7-10, 5.73 ERA) is slated to pitch against Boston on Tuesday, although manager Chris Woodward is contemplating using an opener. Jurado pitched in relief against Oakland on Friday.

Athletics: RHP Homer Bailey (13-8, 4.55) takes a four-game winning streak into Tuesday's start against the Angels. Bailey has six wins since being acquired in a trade from Kansas City.