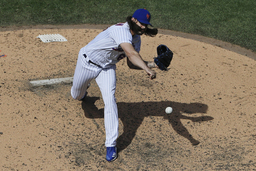 NEW YORK (AP) Mets reliever Robert Gsellman has a partially torn lat muscle that puts the rest of his season in jeopardy, a significant blow to New York's improved bullpen as the team chases a playoff berth.

Gsellman was placed on the 10-day injured list last weekend, retroactive to Aug. 14, with tightness in his right triceps. But an MRI showed a partial tear of his right lat, a similar injury to the one that sidelined teammate Noah Syndergaard for more than 4+ months in 2017.

"We don't know how long this is going to last, so it didn't really change our view on timeline or anything like that. It's just unfortunate that he isn't going to be available to us," manager Mickey Callaway said.

The announcement was made Tuesday before the Mets opened a pivotal homestand against Cleveland. They began the night two games behind the Chicago Cubs for the second NL wild card.

"Very frustrating," Gsellman said. "With the way the team's playing, I want to be with them. But I'm still going to be here. I'm going to work my butt off to try to get back and support the team."

The right-hander said surgery is not required, just rest.

"No timetable. Just going to wait and see how it feels day by day and go from there," he added.

"I think we have the personnel that can step up and fulfill those innings that Gsellman was throwing," Callaway said. "He was a workhorse for us. He was a multiple-inning guy. We might have to fulfill that role with two guys to get two innings at this point, but hopefully somebody else will step up and get the job done."

New York began the night with 23 blown saves, tied for most in the majors, and the bullpen ranked 27th overall with a 5.21 ERA. But the unit's 4.03 mark since the All-Star break was fourth-best in the National League, a big reason the Mets have surged back into the playoff race with a sizzling second half.

The Mets selected the contract of veteran outfielder Rajai Davis from Triple-A Syracuse, bringing him up to the majors for the second time this season. Right-hander Walker Lockett was optioned to Syracuse and right-handed reliever Brooks Pounders, who was in the minors, was designated for assignment.

J.D. Davis returned to the lineup after missing two starts last weekend in Kansas City while nursing a sore calf. Davis, who had a key pinch-hit RBI single Sunday but was removed after going first to third on a double, launched a long two-run homer to straightaway center field his first time up.

In other injury news, Brandon Nimmo moved to Triple-A Syracuse on his rehab assignment and played center field. He has been sidelined since May 21 because of a bulging disk in his neck.

"That makes us feel more optimistic about him coming back and helping us, because we can use him," Callaway said.

Veteran infielder Jed Lowrie began a rehab assignment as the designated hitter for Class A St. Lucie. It was the first minor league rehab game since May 11 for Lowrie, yet to play for the Mets after signing a $20 million, two-year contract as a free agent last winter. He has been out all season due to a series of leg injuries.

"We're also excited about that. It's still a situation where it's going to be day to day, obviously, but for him to get on the field and get his blood flowing in a big situation for him to this point is exciting," Callaway said. "I think that we'll just see how he comes out of it and make the schedule out the next day."