Yankees' Torres thinks Astros cheated `for sure' in 2019 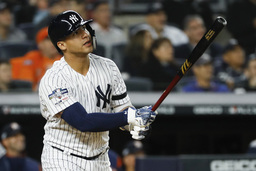 Major League Baseball found that the Astros used electronics to illegally steal catcher's signs in 2017 and part of 2018 but not 2019.

Houston players have apologized for rules violations in their 2017 World Series championship run and also in 2018 but deny any misdeeds in 2019, when the Astros beat the Yankees in the AL Championship Series for the second time in three seasons.

As an example, Torres talked about playing video games with pitcher Luis Severino in which he took advantage repeatedly after seeing his teammate's control panel.

Torres heard from others about possible Astros cheating but didn't believe it.

"First of all, it's not respect to baseball when you cheat," Torres said. "We feel frustration. We play, our team, legal, while Houston don't play legal. Personally, I don't feel good. "

Manfred said Sunday be believed the Astros complied with rules against electronic sign stealing in 2019 but could not be 100% sure.

Yankees skipper Aaron Boone was among around a dozen managers who met Sunday with Manfred.

"We won't be in the business of going after or throwing at people on purpose," Boone said. "We'll just have to see how everything unfolds but I don't expect it to be an issue for us."

Boone plans to make sure that Yankees pitchers are not concerned about working inside.

"I think any of the penalties that come, it's got to be 100% certainty that you know something is going on or you know something happened for certain because those things can be very grey," Boone said. "One of the things I've been assured about from Major League Baseball is that if there's a little grey to it then it's going be kind of status quo."

RHP Masahiro Tanaka threw 20 pitches in his first session against batters since having surgery to remove bone spurs on his throwing elbow on Oct. 23. ... Boone said Giancarlo Stanton, limited to 18 games last year by injuries, is fully healthy and should get a "good portion" of playing time at DH and in the outfield. ... Andy Pettitte arrived in camp as a guest instructor and threw batting practice.